One of the most common perceptions about packet radio is that it is slow. While the over the air baud rates do not compete with broadband Internet, packet radio itself can go much, much further than just about any cellular or WiFi signal as well. While the top speed we can achieve using general purpose equipment tops off about 9600 baud, we can actually do more to improve performance without needing to increase over the air speed at all.

When a packet system first comes on the air, naturally those wishing to connect to it will put themselves on the same frequency. When there is a low number of stations on the air, having all stations on one frequency makes connectivity simple and fairly efficient. As the number of stations increase, each system is then competing for airtime on the same frequency. Now that message transfer that used to occur between the original two stations at fairly good efficiency now has to try and share the frequency with other users possibly transferring messages, participating in a keyboard chat discussion or pulling DX Spots. In many cases, not all stations on a given frequency can hear each other, so despite their best effort can inadvertently transmit over top of one another. If the receiving stations hear both, often times that means it will decode neither. This is sometimes referred to as the Hidden transmitter syndrome or Hidden node problem. When this happens, a retry must be sent to resend the packet which was subject to the collision. It doesn't take too much of this to really cause performance to drop and in extreme cases makes moving traffic difficult, even with retries. This is sometimes referred to as a "flat network" and while great for connectivity can be bad for overall performance.

The only way to get back to that simple and efficient model is to find a way to spread out the users in such a way that they are not all on the same frequency, competing for the precious airtime and bumping into each other. In the case of a well located system on a hill, tall building or tower, this creates what we'll call a "Island Node" that then has it's surrounding users connecting in to move their content of interest. In the flat network described above, a user 2 miles away is using the same frequency a user 30 miles away is trying to use. If the user at 2 miles is using a low profile system, that station at 30 miles will not likely hear it, if both stations are trying to access the Island Node simultaneously, the two users will undoubtedly collide with each other. So what do we do?

One of the best gifts the amateur radio service has been given is the number of bands and frequencies which we can operate. This is where the "Access Bullseye" can help us. The idea behind it is to utilize the propagation characteristics of our various bands in such a way to maximize the bandwidth we are able to achieve at a given distance. Operating under the general guidelines that higher frequencies exhibit higher path loss, are more prone to attenuation by things like foliage or other obstructions, etc. As you begin to move lower in frequencies, these properties still exist, but their effects become less. Eventually we would hit some bottom where it's practical. For this service I think that would probably bottom out on 6m or possibly 10m. Now imagine at the center of this access bullseye is the high profile Island Node system in the area. For the sake of discussion we will list off many bands, in reality the number and selection will probably be less based upon budget, terrain, equipment availability, interest, antenna/tower spaces, etc. Looking at our available bands, the highest practical band to be utilizing would probably be 33cm or 900 MHz band. This band has a fairly short wavelength, attenuation through foliage can be fairly significant. Feed-line losses add up quickly. One would have to be in fairly close proximity to the "island node" to even get a 900 MHz signal in and out. For the sake of discussion we will say that 900 MHz coverage is only usable up to about 5 miles from the "island node" So what do you do? You try and get the users who are in within 900 MHz range to use 900 MHz. Why? Well, those say 10 miles out may not be able to even use 900 MHz due to terrain or other factors. By placing the nearby users on 900 MHz, you not only give them a clear frequency that will never see longer distance traffic, going the other way you free up the next lowest band for the next ring out for those who cannot use 900 MHz even if they wanted to. That next ring of users would then fall to the next lowest band, in our case this would be 70cm. The 70cm band has a longer wavelength, path loss relative to 33cm is reduced, the overall "reach" of 70cm increases, it becomes a natural fit for users outside of that 5 mile coverage range that 33cm is incapable of providing. For the sake of discussion this pattern can continue, we'll call 70cm from 5-10 miles, 1.25m 10-25 miles, 2m 25-40 Miles and 6m 40-70 Miles. In reality it will not be that clear cut, each station would need to perform some testing to figure out which highest band was usable for their given location and terrain. In addition the user would have to be willing to even try, they may or not be interested or even have the needed equipment. This is just an "ideal" situation, but something to consider. For illustration purposes we will pretend the access ranges are a circle, drawing them nested the bullseye could look like this: 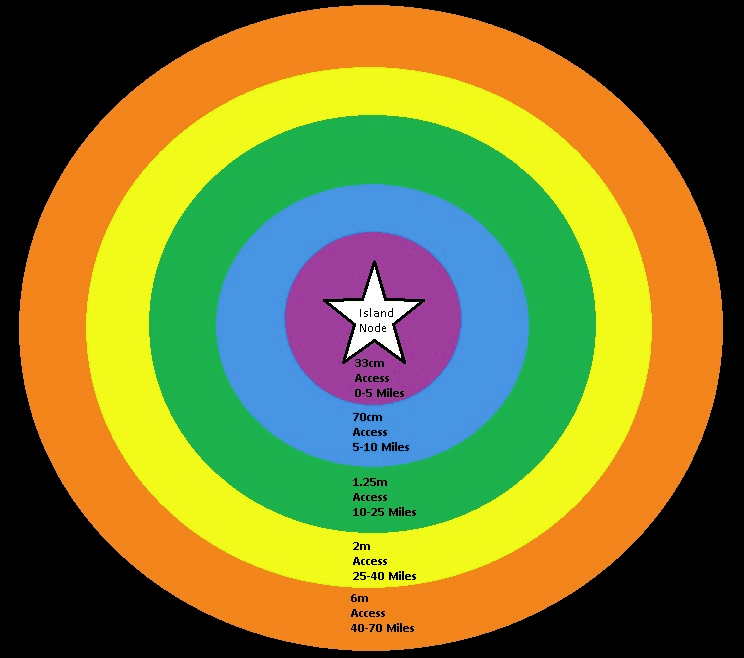 Each ring is on a separate band, greatly reducing the impact of using a single frequency for a larger area. Taken to an extreme case, that user at 40 miles distance would never be competing for a frequency from a user at 20 miles or 8 miles even if they were all operating at the same time. In terms of actual adoption, the bullseye may only have a ring for 70cm and a ring for 2m, but there is still some benefit if it is able to be implemented.

If your packet system is currently on 2m only and you have a separate 70cm or 2m/70cm antenna, consider turning on a 70cm port and encouraging users in close proximity to move their stations up and use it. They will likely see improved performance and also leave 2m for those stations who are at greater range who may need the propagation characteristics to make that connection.

Part of the challenge of successfully implementing the Access Bullseye is user adoption. The popularity of 2m radios generally dwarfs that of 2m/70cm radios and even more for 70cm only radios. To encourage this adoption, we will provide commercial UHF radios retuned to 70cm to any Island Nodes for the cost of shipping and also offer these same radios to users at a low cost plus shipping as well. Please contact us for details.