The Kenwood TK-760(H)/762(H)/860(H)/862(H) are relatively low cost commercial radios that can be reprogrammed to work in the 2m and 70cm bands and depending on band and model are rated for 25-45w output. With a steady hand and fine tipped soldering iron, they can be modified for 1200-9600 baud service, VARA FM/FM Wide, including optional COR/COS signaling for hardware carrier detect or use in other services like Allstarlink, Echolink, SVXLink, Repeater controllers/remote base, etc. This guide wires them to the Kantronics DB-9 standard and is compatible with the 4 Port packet controller and NinoTNC, details to support adaptation to other interfaces/TNCs/controllers is included. 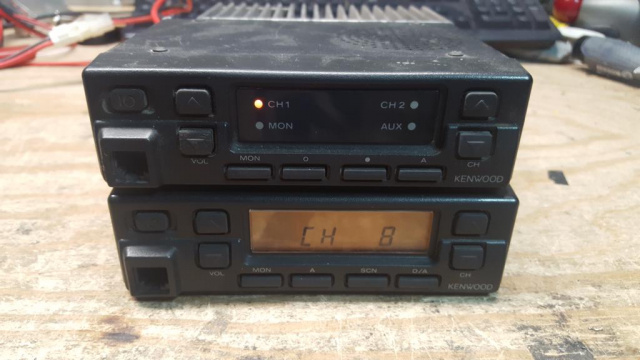 The band splits are indicated differently between some documentation and what is actually printed on the radio. The labels on the radio seem to be numeric while the documentation references the letter K. Cross referencing the two:


For VHF, the K(1) is the most common split, but both the K(1) and K2 splits cover all of 2m (144-148 MHz) without issue. For UHF, the K(1) split is also the most common split (450-470 MHz) and can usually cover at least 438-450 MHz, some of them will go down as low as 430 MHz with a simple VCO adjustment. The less common K2 (470-496 MHz) and K3 (488-512 MHz) splits are too far away from the 70cm band to be used and should be avoided except for part donors. The least common K4 split (406-430 MHz) can probably cover the lower portions of the 70cm band, possibly up to 440 or higher. We have not been able to obtain any of these to test, though they be may more available in proximity to Line A along the northern border of the USA and up in Canada where it is a commercial band. If you do end up with a K3 split and want a K split, please contact us to arrange a trade, we will cover shipping in both directions.

Prior to beginning any modification, it is best to test the radio for proper functionality. If the radio was purchased used, there is a fair chance it is programmed to commercial frequencies. Reprogramming into the amateur bands is possible for the TK-760(H)G/762(H)G/860(H)G/862(H)G using the KPG-29D software which is available for DOS only. In general, the VHF high band versions will work well into the 2m band with little or no adjustments needed to the VCO or receiver. The UHF versions (K split, 450-470 MHz) will often work without modification in the upper 10 MHz (440-450 MHz) and sometimes lower. Many of the UHF versions can go lower into the 70cm band by adjusting the VCO circuits. Some may go down as low as 430 MHz or possibly lower. It should be possible to add small amounts of parallel capacitance across the trimmer capacitors in the VCO section to pull it's range lower in frequency. This will likely be explored in the future. 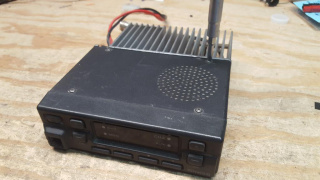 2) With the top cover removed, use a pair of pliers to gently pull out the speaker from the main board, setting the speaker aside for now. 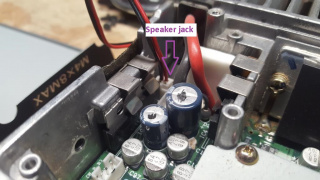 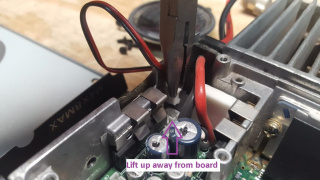 1) Take a continuity tester and verify a DC short between the DB9 pin number 6 and the radio chassis as well as DB9 shell
2) Measure for DC voltage across DB9 pin number 3 (PTT). If present, attach suitable antenna or dummy load to modified and short pin 3 to the DB9 shell or DB9 pin 6, this should cause the radio to transmit.
3) Measure AC voltage across DB9 pin 5. This is discriminator receive audio and will be a fairly steady AC voltage with no signal present. If AC voltage is measured and another transmitter is available, transmit a dead carrier with no audio, this should cause the AC voltage to drop significantly if not fully near 0 volts indicating the receiver has a full quieting signal.
4) If the COR circuit was added and COR enable jumper was placed, measure DC voltage across DB9 pin number 2. With no signal present, the DC voltage should be near 0. Using either the MON function on the front of the radio OR using a secondary transmitter on the frequency, open up the squelch and this pin should read about 5VDC.
5) Create a short between DB9 pin numbers 1 (TX Audio) and 5 (RX Audio). On an secondary receiver, tune to the modified radio transmit frequency. Short DB9 pin 3 to ground either on the DB9 shell or DB9 pin 6. This should cause the radio to transmit and the secondary receiver should pick up a signal with static. Momentarily break the short between DB9 pin numbers 1 and 5, this should turn the signal from full quieting and static off the discriminator.

1) Attach the radio to a compatible interface. If the interface/TNC does not use the Kantronics DB9 standard, a suitable adapter will need to be made. To review, the DB9 pinout is:

2) Place the modified radio on a known packet frequency. If none is available on VHF, a good candidate for traffic is the national APRS frequency, 144.390 MHz in North America, 144.80 in Europe. Optionally turn up the volume on the radio and listen for packet bursts to come out of the speaker. When a packet burst is heard, check the interface/TNC for a successful decode.
3) Placing an auxiliary receiver on the radio transmit frequency, issue an outbound connection and listen for a packet burst on the auxiliary receiver. If no other station exists, a dummy call can be used: